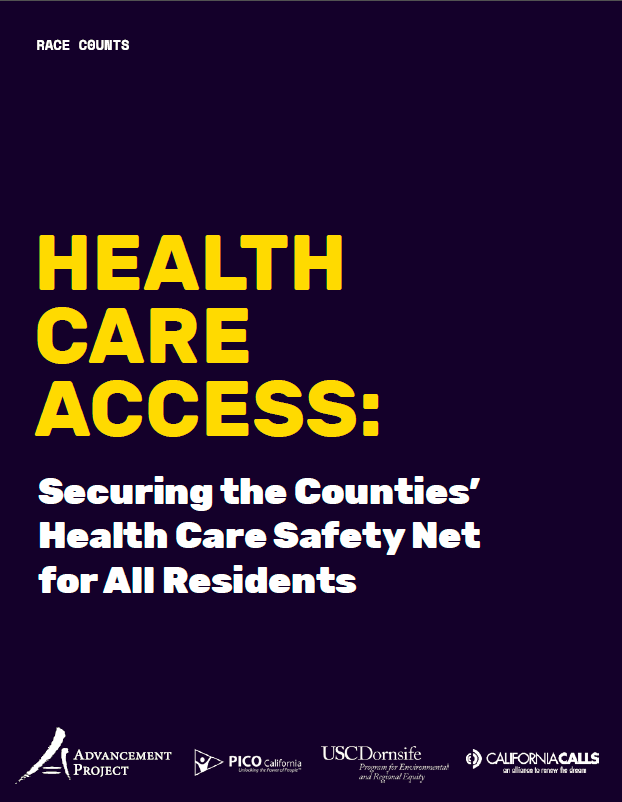 Securing the Counties’ Health Care Safety Net for All Residents

Despite the significant gains in terms of health coverage, access, and utilization made since implementation of the Affordable Care Act (ACA), racial health disparity remains omnipresent in California. While a radical force for change in many respects, the ACA’s reforms were largely built atop our pre-existing health care system, inheriting its disparities. Because health disparity drivers abound in and outside our health care system – undermining our state’s well-being – agents advancing health equity become even more vital.

Los Angeles County’s health care access disparities are similar to those seen statewide, yet its performance on most indicators is poor – with especially poor access to a usual source of care.  While the ACA benefitted L.A. County more than many others – due to its size and high level of need – it continues to face many access barriers and challenges. Residents and leaders have taken the initiative, advocating for innovations such as a county safety net program offering comprehensive health care to impoverished residents regardless of immigration status via community health centers.

Riverside County’s expansiveness can make accessing health care difficult – particularly for its low-income residents of color. Riverside is generally lower-performing on health care access measures than the state as a whole and pairs it with high levels of disparity in some key indicators.  The ACA period brought a marked increase in community health centers countywide but the county is heavily reliant on these few dozen CHCs and a handful of hospitals to provide limited safety net health care services to uninsured Riverside County residents, regardless of immigration status.

Merced County’s high rate of poverty combined with ACA-era eligibility expansion means that over half of all county residents now qualify for Medi-Cal. They are primarily served by the county’s community health centers – centers struggling to attract health care providers while serving an ever-growing number of patients and without the benefit of a county-funded safety net program to underwrite these efforts.  Merced’s poor health care access performance cuts across all groups, meaning racial disparities here are comparatively lower than other counties but point to systemic challenges.

There were community health centers located across Los Angeles County. This was an increase of 0 sites countywide since the ACA was enacted – a 0% increase. when the ACA came into effect.

People of Color +
People in Poverty (#)

Map shows Community Health Centers noted in the data as operating during the selected year.

Los Angeles County had a significant increase of community health center sites during the ACA years, going from 248 sites to 341 – a 38 percent increase. These CHCs serve a huge proportion of county residents – a pattern that accelerated with a 21 percent increase from 2011-15. The more than 1.5 million CHC patients countywide are, disproportionately, Indigenous people and people of color, with 62 percent identifying as Latino (of any race), 10 percent as Black, 7 percent as Asian/Pacific Islander.

Los Angeles County’s rate of uninsured adults and children during this time dropped to historic lows but disparities in coverage persisted.  Likewise, the county had a stark reduction in preventable hospitalizations across all racial & ethnic groups – but these gains were not enough to erase the substantial, stubborn disparities in this measure.

Riverside County saw the largest percentage increase of CHC sites of any of our three counties with 15 new sites added during the ACA years, an increase of 71 percent. Yet, this fact reflects an inadequate starting point – as even with the new additions there are still only 36 tightly-bunched sites serving a county with more than 2.4 million residents.

Nonetheless, CHCs in the county did show a significant (52 percent) leap in the number of patients served during these years. Those using CHCs are much more likely to be people of color than the overall county population. In 2015, 58 percent of Riverside County CHC patients identified as Latino (of any race), 6 percent as Black, 3 percent as Native American, and 2 percent as Asian/Pacific Islander.

Most Riverside residents did not have as pronounced a reduction in preventable hospitalization as they did statewide – and Native Americans here had larger increases in such visits than seen statewide.  In the reverse of the CHC scenario above, however, this partly reflects a positive starting point – as some racial/ethnic groups in Riverside outperform their statewide rate in this measure.

Merced County’s safety net capacity did not accelerate at the pace needed to keep up with the 34,000 residents who gained coverage via Medi-Cal expansion. In fact, Merced County gained only two community health centers during the ACA years – leaving the county with 18 sites as of 2015. Those CHCs saw 109,000 patients – a rather incredible 40 percent of all county residents.  Yet this represents only an 11 percent increase in patients seen over this timeframe – far below the increase in our other spotlight counties – demonstrating the CHCs’ vital role as the county’s primary care providers predated the ACA years.

These community health centers disproportionately serve Merced’s people of color. In 2015, 72 percent of the county’s CHC patients identified as Latino (of any race), 4 percent as Asian/Pacific Islander, 3 percent as Black, and 1 percent as Native American.

The county made steep declines in the rate of preventable hospitalizations for most Merced County residents – outpacing the state and our other spotlight counties – though, for reasons that are presently unclear, the county’s Native American residents did considerably worse over this timeframe.

OFFICE OF STATEWIDE HEALTH AND PLANNING (2015)

Federal reporting policy considers the Latino/Hispanic category to be an ethnicity – meaning Latinos can be of any (or more than one) race such as White or Black or Other. Public health entities – such as community health centers – generally follow this convention in tracking patient’s racial background and may supplement with an ethnicity question to give a fuller demographic profile. This accounts for the two separate charts above. By contrast, RACE COUNTS has adopted a simplified view of race to portray racial data to a broader audience – recognizing that race is both a social and a biological construct. By this logic, RACE COUNTS charts included in this report break out Latinos as a standalone group alongside White, Black, etc.

Los Angeles County did not passively rely on the ACA’s coverage expansions to improve health equity in the county. Advocates and officials created a new county-run program, My Health LA, to serve county residents ineligible for Medi-Cal by assigning them to a local community health center for care, where they can access a range of primary care options free of cost. Critically, the program is available to residents regardless of immigration status. By 2015, My Health LA was serving more than 140,000 county residents – a full 94 percent of whom identify as Latino.

Fortunately, local health advocates have demonstrated the leadership to take on these challenges. They continue to push for making My Health LA’s innovative services available to more residents. Countywide, a host of campaigns are bringing together philanthropies, service organizations, health advocates, and officials to work on issues ranging from improving the health workforce pipeline to expanding programs for justice-system-involved Angelenos to creating a new Center for Health Equity.

Riverside County’s safety net program remains wide but shallow in the wake of the ACA. While eligibility standards are relatively-generous, it fails to cover primary care – leaving its participants eligible for only late-stage emergency care via its hospital network. County contributions to safety net care stayed relatively stable over this timeframe while the state contribution dropped considerably.  As a result, the program’s well-being depends more than ever on county financial support, but the Board of Supervisors has yet to refocus scarce resources on populations and services that could advance health equity.

One of the biggest local barriers to equitable health care access is the disconnect between low-income county residents’ health needs and available services – exacerbated by a lack of affordable, accessible transportation. The uncoordinated, underfunded transit network—particularly in rural areas—leads to patients delaying needed care and waiting until emergencies to finally seek out costly transit to care sites.

These challenges have spurred health advocates to band together to press the County and local transit providers to better integrate transit lines with health care providers in far-flung parts of the Riverside County. Recognizing this challenge, local CHCs have begun innovative transportation programs to bring needy patients from remote areas to the care they need.

In the wake of Medi-Cal eligibility expansion in 2014, Merced County effectively shuttered its existing safety net health program. For those lacking coverage (such as undocumented adults), there is no real safety net—they must pay out of pocket or delay care until being hospitalized with an emergency. This blinkered approach may reduce the county’s outlays, but at the cost of reducing access to care for undocumented residents.

Health provider access challenges abound in Merced County.  Particularly alarming was local CHCs inability to attract and retain physicians during the ACA years, even as those eligible for Medi-Cal skyrocketed countywide. In fact, the CHCs actually had fewer doctors to meet residents’ health needs—a trend completely out of step with the statewide one.  While there was an increase in the number of nurses in these CHCs, advanced care was harder than ever to access and specialty care was almost non-existent — problems all too common in many of the state’s more rural counties.

In 2017, officials and advocates banded together to press the Board of Supervisors to reinvest in a county safety net program—one that for the first time would serve all county residents, regardless of documentation status. While these Health4All efforts were dealt a blow by a October 2017 vote defeating the motion to fund such a program, the efforts illustrate the growing voice countywide making the case that the lack of a safety net program is undermining Merced County’s overall health and prosperity.